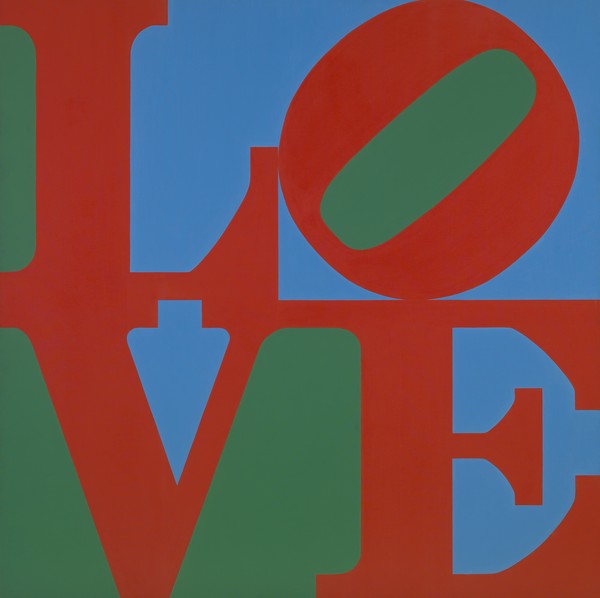 Robert Indiana’s painting LOVE is a formally sophisticated abstract composition, yet it is also, in essence, a one-word poem. The brilliant contrast of the colors and the bold contours of the letters imbue the word with an extraordinary visual intensity. Indiana has arranged the word so that it fits in a square format, with the stacked letters touching one another in a manner that suggests physical intimacy.

This work belongs to a series of paintings, sculptures and prints dedicated to the theme of love that Indiana commenced in the mid-1960s. He created many variations on this theme, including a design for a Christmas card that was commissioned by the Museum of Modern Art in New York in 1965. Indiana rendered that composition on a monumental scale in the present painting. Since its inception, Indiana’s distinctive rendering of “love” as both a word and an image has captured the popular imagination and become one of the most immediately recognizable works of art in the world.

Born Robert Clark in New Castle, Indiana, the artist changed his last name upon moving to New York City in 1954. In the early 1960s, Indiana explored the style of hard-edged painting that his friends such as Ellsworth Kelly were exploring. His interest in words, however, distinguished his works from other abstract painters of the time. Indiana had a long-standing interest in the written word, having been inspired by poets such as Gertrude Stein early in his career. His composition for LOVE is innovative in the way it dissolves divisions between seeing and reading, as well as figure and ground. Indiana has described the character of his work as “verbal-visual.”

In this painting, four red letters affectionately touch, spelling out the word ""love."" This symmetrical, hard-edged composition belongs to a series that Indiana developed between 1964 and 1966 and that comprised Christmas cards, paintings, posters, sculptures, felt banners, eighteen-karat gold rings, silk tapestries, and album covers. After pirated versions of LOVE began to appear in various contexts, Indiana tried to copyright his unique work, but the federal government rejected his application, arguing that no one could copyright a single word. Indiana's signature emblem became one of the most reproduced and highly recognizable art-historical images of the post-World War II era. In 1970, Indiana made a twelve-foot Cor-ten steel LOVE sculpture, now in the IMA's permanent collection. Some critics believed it manifested the artist's desire to reclaim his ""stolen"" design.

Born Robert Clark in New Castle, Indiana, the artist changed his last name when he moved to New York City in 1954. Although he has claimed frequently that the idea for his series came from the Christian Science motto, God is love, which he saw in church as a child, Indiana's work also resonated with the 1960s counterculture. Stylistically, LOVE most often has been characterized in relation to Op art because of its repetition of bright, vibrating, simple forms and to Pop art because of its appropriation of sign painting, an important by-product of consumer culture.

LOVE was a watershed in Indiana's career, and it became a motif that he has never abandoned.
-Art historian Susan Elizabeth Ryan, 1999