“Commonly known as ‘Red Fuji', no other print in Hokusai's oeuvre takes Nature so uncompromisingly as its subject. Whereas in the majority of Hokusai's landscape designs Nature is used as the setting in which human life goes on, nothing in this print suggests man's presence: there is only Mount Fuji, towering against a blue sky patterned with white clouds.

The season is somewhere between late summer and early autumn, when Mount Fuji is said to have a reddish hue. The snow makes a sharp contrast to the almost black cone of the summit. The emphasis given to this, the darkest area of the design, is balanced by the woods at the foot of the mountain. The subdivision into a dark summit, reddish mass and a green, tree-covered base is in itself sufficient to make the mountain appear intriguing. Yet, Hokusai chose to set off Fuji with a blue sky that is almost completely filled with an intricate pattern of clouds, which demands equal attention. This type of cloud is unique in Japanese prints – and, for that matter, in Japanese art: it obviously emulates Western models, and probably derives from Dutch copperplate engravings.

That Hokusai chose to use these Western-style clouds in one of his first true landscape prints may have been, in part, the result of a desire to attract the public's attention to his art, although some fifteen years earlier, in the fifth volume of his picture book Hokusai manga (1816), he had included a similar design, with Mount Fuji seen from the pine beach of Shio. However, it was only printed in line and in tones of grey and pink, and in a much less prestigious format. Only when this large, ?ban colour print was published did Hokusai's innovations in landscape design become apparent.

The colour variations in this print—the shading from black to red and from reddish-brown to green, depending on the printer's interpretation—which are probably greater than in any other of Hokusai's designs, are frequently commented on. Most of the early and the carefully graded impressions, however, feature particularly strong colouring, lending a quite dramatic sense of presence to the mountain. There is also a later, variant, reprint (Ukiyoe taikei, XIII, 2-2) from the original blocks, in which the blue outline of the mountain is omitted and the title cartouche and signature are printed in black. For that impression, a blue block was employed for both the sky and for Fuji, and stronger blue for the mountain's slopes, while its base was printed in a light tone and the upper half left uncoloured.”

This richly colored print from Katsushika Hokusai's renowned series Thirty-Six Views of Mount Fuji explores the majestic mountain's continually changing relationship to light, weather, and the seasons. The charm of this print derives partly from its simple but striking composition: Fuji's symmetrical shape, placed off center to the right, is balanced by the intricate, lilting cloud patterns on the left. Although Hokusai's copious sketchbooks reveal his wide-ranging visual interests, he and his contemporaries were best known for perfecting the poetic landscape print. Hokusai's studies of Mount Fuji, with their unorthodox perspective, stylized forms, and saturated color, inspired the Impressionist and Post-Impressionist painters working in late 19th-century Europe. The idea of studying the effects of various atmospheric conditions on a single motif may have inspired Claude Monet to create his series of haystacks, waterlilies, and London bridges.

Hokusai's output was prodigious and his fame widespread, but to the end of his life he lived in poverty. He said, ""From the age of six I had a penchant for copying the form of things, and from about fifty, my pictures were frequently published, but until the age of seventy, nothing that I drew was worthy of notice."" Hokusai was in his seventies when he made this print.

[After lunch] we could go see the Japanese prints at the Beaux-Arts. Seriously, you must not miss that. You who want to make color prints, you couldn't dream of anything more beautiful.
-Painter Mary Cassatt to fellow artist Berthe Morisot, 1890

The Unity of Impression

“Hokusai's prints lie between two opposing style, that of the Japanese of the ancient schools, suggesting by evocative arrangements in monochrome a landscape of the imagination, and that of our own western landscapists, approaching as near as the oil or watercolour mediums will allow to a realistic representation of certain place at a certain date and time. The compromise is one that allowed free play to Hokusai's genius for design, for composition: although his intent, expressed by a descriptive label on each print, was to depict a known locality, or Fuji from a familiar vantage point, the depiction is mainly incidental, the overriding consideration has been the pattern, the possibilities of the scene from the colour-print viewpoint. There is a lack of insistence upon the identifying detail, either of contour or colour, since such an emphasis would have destroyed the unity of impression that is his paramount aim. The ‘Fuji in Clear Weather' is a perfect example: it is the essential Fuji, every distracting and insignificant detail shorn away.” 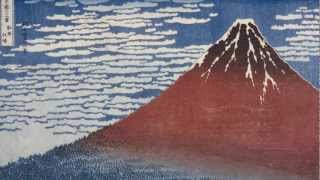 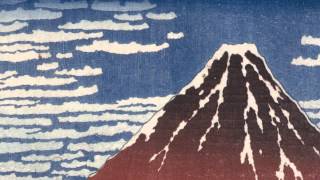 John Teramoto discusses Katsushika Hokusai's comments regarding his own work, a print completed in his early seventies.