Descended from three generations of woodcarvers, Fakeye has successfully blended traditional and contemporary Yoruba themes. He has emerged as an international artist with worldwide commissions. In carrying on his family tradition of woodcarving, Fakeye has trained all of his junior brothers and nephews in his studio in Nigeria.

This carving depicts a traditional Yoruba subject, the mounted warrior. The gun, sword and coiled snake around his hat indicate that the mounted warrior is a son of Ogun, the Yoruba deity of iron. The drummer perched behind the warrior is relaying messages. This piece reflects Lamidi's later style of more elaborate carvings and use of Western tools. 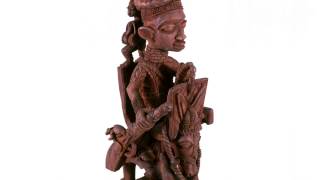 Visiting Curator of African Art Elizabeth Morton describes the role of the horse in Yoruba culture as well as the powerful warrior imagery found on the //Mounted Horseman.//