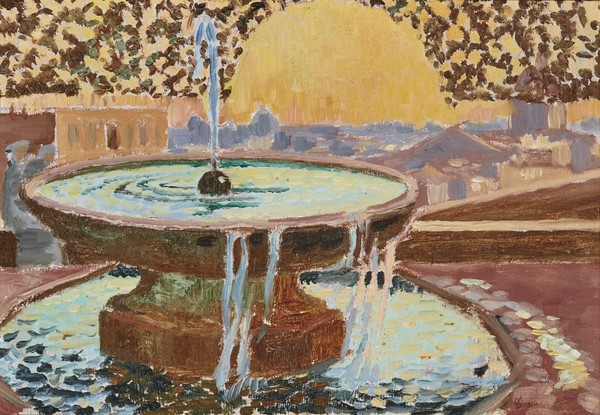 Fountain at the Villa Medici

• Frenchman Maurice Denis adored the city of Rome and painted this view of a fountain at the Villa Medici during his third trip to Italy.

• The broad touches of orange, brown, and green in the upper portion of the scene are his way of rendering the dense foliage of nearby trees, trimmed to form a thick bower arching over the fountain.

• The leaves, and the simplified forms of the Roman skyline, reflect Denis’s lingering allegiance to the flat, decorative patterns favored by the progressive artists who called themselves Nabis, from the Hebrew word for prophet. Denis was their chief spokesman.

{1} A photograph of the artist Théo van Rysselberghe in his study, dated about 1922, shows this small painting by Denis hanging on the wall. See Ronald Feltkamp, Théo van Rysselberghe, 1862-1926 (with catalogue raisonné), Brussels, 2003, p. 13. Rysselberghe met Denis already in 1890, and was known to have exchanged works of art with his artist friends.