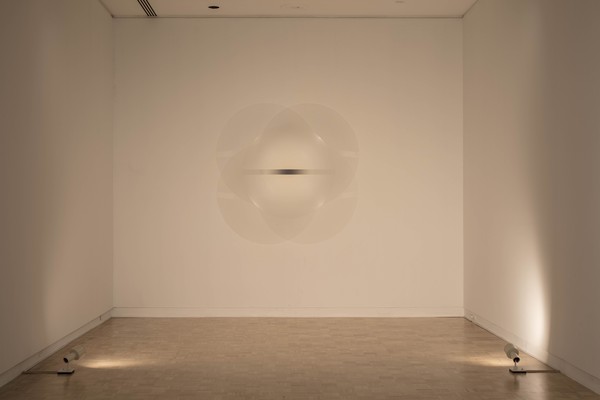 Untitled belongs to a series of spray-painted aluminum and cast acrylic disks that Robert Irwin created between 1966 and 1969. The sculpture consists of a central, slightly convex acrylic disk bisected by a horizontal three-inch-wide gray line, suspended by a concealed clear Plexiglas cylinder protruding nearly two feet from the wall. The work is cross-lit by four incandescent lights, casting four overlapping shadows. Irwin's use of light and space makes the sculpture appear to float, and deliberately incorporates these halo-like shadows as part of the artwork.

Robert Irwin read the perceptual philosophy of Maurice Merleau-Ponty, which emphasizes that perception requires an interaction between the body and an object in the world. The disk series demonstrates an important moment in Robert Irwin's development as an artist, as he moved away from abstract expressionist painting to engage with light, space, and multisensory perception.

This work importantly demonstrates Robert Irwin's movement away from what he came to perceive as the limited realm of painting into the expansive world of light, space, and multisensory perception. Untitled belongs to the celebrated series of spray-painted aluminum and cast acrylic disks that Irwin created between 1966 and 1969. This sculpture, which consists of a central, slightly convex acrylic disk bisected by a horizontal three-inch-wide gray line, appears to float in the air, but is in fact suspended from a concealed clear Plexiglas cylinder protruding nearly two feet from the wall. The disk is cross-lit by two incandescent lights on the floor and two on the ceiling. The lights, which are equidistant from each other, cast four symmetrical, overlapping shadows on the wall, producing a four-leaf clover or halolike effect. In this work, Irwin used plastic, aluminum, light, and color to blur the boundaries between painting, sculpture, architecture, and the viewer.

Before moving into the disk series, Irwin exhibited Abstract Expressionist paintings at the Ferus Gallery in Los Angeles, where he met artists interested in Asian mysticism and Zen. He also began reading the existential perceptual philosophy of Maurice Merleau-Ponty, which emphasized that perception requires an interactive relationship between the body and an object in the world. Increasingly, Irwin experimented with reductive, Minimalist painting techniques in order to make the edges of his paintings appear to dissolve. In the disk series, Irwin eliminated the square format entirely, using an oval as a means of engaging the surrounding world more directly.

Visually it was very ambiguous which was more real, the object or its shadow. They were basically equal.
-Robert Irwin, 1982