In 1889 Gauguin worked in the village of Le Pouldu. There he created this dizzying panorama, recording the site's craggy cliffs and the waves breaking on the beach. At right are a girl with her scythe and a boy playing a flageolet, or flute - symbols of the artist's attachment to the harmonies of Breton life.

Yet Gauguin also altered the view to suit his imagination, boldly pairing near and far, steep and flat to create a complex surface pattern. And where has he placed the viewer-hovering perilously over the abyss?

In 1889, Paul Gauguin returned to Brittany and spent much of his time at Le Pouldu, a coastal village even more remote than Pont-Aven. There he created this dizzying panoramic view of the rugged Atlantic shoreline. With bold pairings of near and far, steep and at, Gauguin merged distant beaches and craggy cliffs into a nearly abstract surface pattern of brilliant color. His image, however, for all its disorienting space and dazzling palette, does resemble the actual site. Period photographs show that the waves at upper left do meet the beach in a series of broad arcs, and Gauguin wrote that the wet sands of Le Pouldu looked rose, not yellow. The canvas is a powerful application of the Pont-Aven School approach called Synthetism, which calls for a synthesis of the artist's response to nature and sense of design.

At the right edge of the composition Gauguin has included a narrow path and a Breton boy and girl. The girl leans against the wall with her scythe, apparently taking a rest from cutting wheat in the adjacent field, represented by the flat area of golden color in the lower right corner. Her companion plays a flute-like Breton instrument called the flageolet, another reminder of Gauguin's attachment to the harmonies of life in Brittany.

Do not paint too much from nature. Art is an abstraction; let yourself dream in front of nature and extract from it, and think more of the creation that will result.
-Paul Gauguin, 1888

A tour-de-force balance of abstraction and representation, Flageolet Player on the Cliff, Brittany is also a complex exercise in linear stylization paralleling Vincent's own ‘exaggerations,' which he compared to the warped lines of old wood—one thinks of The Starry Night, which Gauguin had learned about prior to leaving for Le Pouldu in July.

The Geography of the Cliff

"Le Joueur de Flageolet sur la Falaise features the rim of the cliff which drops off to the Plage Porguerrec. Painted at high tide, the beach below is overwhelmed by the surf. Gauguin was positioned on the west edge of the Fort Clohars promontory at a somewhat higher level than can now be reached.”—p. 616 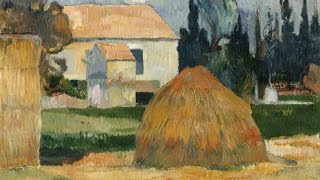 Gauguin and the Generation of the 1890s

Watch a lecture by Dr. Gloria Groom and hear her discuss the “radical abstraction” of //The Flageolet Player on the Cliff// (34:06).