The Virgin of Guadalupe is one of the most important sacred images in Spanish America. In this painting, the artist has included four scenes from the story of the Virgin Mary’s miraculous appearances near Mexico City in 1531, when she asked an indigenous man named Juan Diego for a shrine to be built in her honor. When the Spanish bishop refused to believe that such a message had been entrusted to an Indian, the Virgin made flowers grow on the site and imprinted her likeness on Juan Diego’s cloak. The figure of Mary on his cloak, depicted in the center of the canvas, is the miracle-working image still venerated in the shrine dedicated to the Virgin of Guadalupe in Mexico City.&nbsp; Probably painted for a devotee in Spain, works like this one helped to spread the cult of Guadalupe throughout the Spanish-speaking world.

The Virgin of Guadalupe in Spain

“As the Virgin of Guadalupe of Tepeyac gained renown in the seventeenth and eighteenth centuries, paintings such as this one traveled across the Atlantic and were warmly welcomed in peninsular Spain. The quantity of these paintings prompted at least one Spaniard to register concern that the fame of the Mexican Virgin grew at the expense of local sacred imagery. Despite its origin in the New World, this painting had clear affinities with Spanish artworks. For example, the radiant figure of Mary atop the crescent moon derived from the well-established tradition of the “woman clothed with the sun” (mulier amicta sole). This iconography is characteristic of representations of the Virgin of the Immaculate Conception.

Four putti hold symbols of the purity of the Virgin, including, for example, the rose without thorns. The small, round mirror set into a stand reflects the Book of Wisdom 7:26: “For she is a reflection of eternal light, a spotless mirror of the working of God, and an image of his goodness.” The tower is based on the Song of Solomon 4:4: “Your neck is like the tower of David, built for an arsenal.” At the top center, the Holy Spirit descends to bestow divine grace on her likeness. These sacred attributes, which do not appear in the original painting in Tepeyac, reinforce the miraculous nature of the Virgin of Guadalupe.”

The Significance of a Sacred Image

“The Virgin of Guadalupe of Tepeyac is among the principal sacred images of Spanish America. Her foremost attraction has been her ability to work miracles, thereby upholding the divinely established order of the world. The history of her deeds has motivated the widespread reproduction of her likeness, with the objective of extending her miraculous power into the artworks.

To vouch for the efficacy of the image, the artist here added four narrative scenes to illustrate its remarkable origin. Her first appearance is held to have taken place in 1531, when an indigenous man, Juan Diego, heard music coming from the heights of Tepeyac, near Mexico City. On ascending the hill, he witnessed an apparition of the Virgin Mary. She spoke to him in his own language—Nahuatl—and asked him to go to the bishop and convey her wish for a temple built in her honor on that site. Juan Diego obeyed her command, but the European-born ecclesiastic refused to believe that the Mother of God would appear to an Indian. Juan Diego returned to Tepeyac, where the Virgin appeared a second time and instructed him to speak to the bishop and insist that her request be honored. The bishop then responded by asking for proof of the apparitions. The Virgin appeared to Juan Diego once more, telling him to climb the normally barren hill and gather flowers to present as evidence. He collected the flowers in his tilma (a cape or mantle) and took them to the bishop. When he unfolded the garment to display the flowers, they fell to the ground and revealed the image of the Virgin of Guadalupe miraculously imprinted on the cloth. The bishop then knelt in recognition of this fourth apparition.

The story captivated people in Mexico, who saw that the New World could draw the attention of the heavens without mediation by Europe.”

In the possession of the Aguilar Galindo family, Marchena, Seville, since the 18th century; (Manuel Piñanes, Madrid); purchased by the Indianapolis Museum of Art in 2008 (2008.361). 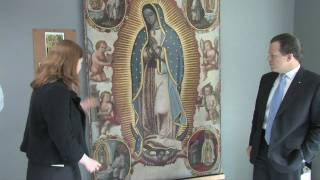 The Virgin of Guadalupe Between Spain and the New World

Former director Maxwell Anderson and curator Ronda Kasl discuss the art relationship between Spain and Mexico at the time the Virgin of Gudalupe was painted. 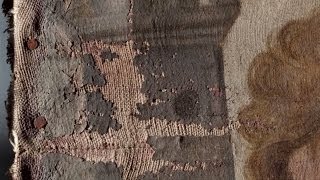 Conserving the Virgin of Guadalupe

Conservator Christina O’Connell reveals the long process of conserving an 18th century work of art that had not undergone any previous conservation.