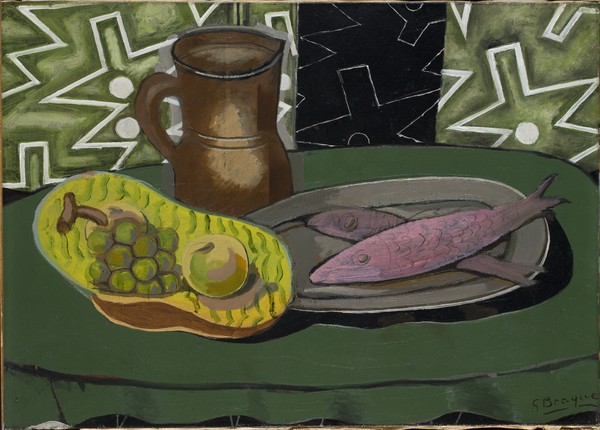 When Braque painted this canvas, Cubism was thirty years old and the artist had greatly modified his approach to the movement. He replaced the complexity and intellectual rigor of early Cubism with a less fragmented structure and brighter color. The multiple view points of his earlier still lifes have given way to a more unified perspective on a simpler composition.

To unify his picture, Braque used visual rhymes such as the fish tails and the angular notches of the green and white background. Despite the tilting planes and jagged shapes, the painting has the compositional balance and structure faithful to the classical ideals of the French painting tradition.

(Rosenberg and Helft, London, England) in 1938.{1}
probably directly to (Theodore Schempp, New York, New York);
from Schempp to Caroline Marmon Fesler [1878-1960], Indianapolis, Indiana, in 1944;{2}
bequest to the John Herron Art Institute, now the Indianapolis Museum of Art at Newfields, in 1961.

{1} Label on original frame indicates that Rosenberg and Helft, London, owned the painting when it was exhibited at the Arts Club of Chicago in 1938 [the annotation to the label in pencils says 1939. (See also the catalogue of this exhibition at the Arts Club, Georges Braque: Retrospective Exhibition, 7 -27 November 1939, catalogue no. 60.) Between the wars Paul Rosenberg maintained a branch of his Paris gallery in London in partnership with his brother-in-law Jacques Helft.
{2} Receipt for purchase dated 26 April 1944 in IMA Historical File (61.39).