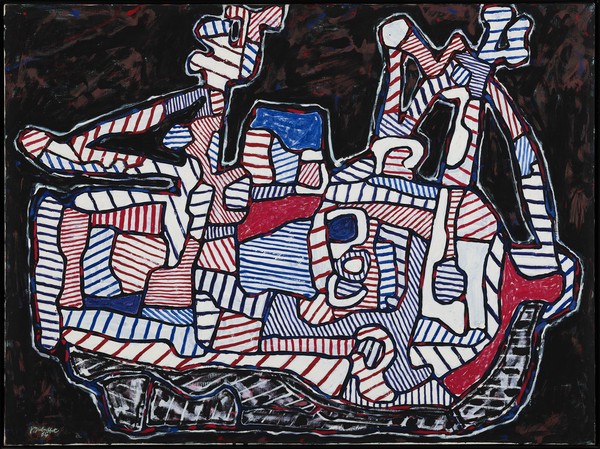 This work is in a style that Dubuffet called Hourloupe, a nonsense word meaning "grotesque object, something rumbling and threatening with tragic overtones," according to the artist. At first glance, the image appears to be nonrepresentational. Yet, with closer scrutiny, a boat and fishermen can be seen. The title implies that these fishermen are fishing for whiting. Dubuffet was strongly influenced by art produced by children, psychiatric patients, and other untrained artists, for which he coined the term art brut, or "raw art." He also drew on ancient and non-Western cultures in his art.

Late in his career, between 1962 and 1974, Jean Dubuffet created a group of works that he called the Hourloupe series. He invented the term Hourloupe supposedly because he believed it connoted ""a grotesque object, something rumbling and threatening with tragic overtones."" The series originated in red, blue, black, and white ballpoint-pen doodles that first covered scraps of paper and then spread onto paintings, sculptures, architecture, and theater sets. Courre Merlan, one of these works, appears at first to be purely abstract: a puzzlelike form, subdivided and filled with parallel lines like hatchmarks, sits against a loosely painted ground. However, the title, Whiting Chase, encourages the viewer to engage in a game of associative play. While one person might discern the image of a fisherman in a boat, another might see a tall-masted ship sailing at sea.

The painting's seeming stylistic naïveté-its flatness, compressed imagery, limited palette, and spontaneous brushwork-suggests Dubuffet's indebtedness to Surrealism and to Dr. Hans Prinzhorn's book, Artistry of the Mentally Ill, which he read in 1923. Although he did not consider himself a Surrealist, Dubuffet valued the unconscious as a source of hallucinatory imagery. Prinzhorn's book endorsed this position, arguing for the authenticity and psychological immediacy of art made by asylum inmates, children, and so-called primitive cultures. Dubuffet subsequently collected art by the mentally ill, for which he coined the term art brut, or ""raw art,"" and dedicated himself to simulating its aesthetic attributes. Dubuffet summarized his artistic philosophy in 1951 in a text called ""Anticultural Positions,"" in which he celebrated the irrational and madness and denigrated western notions of beauty.

Art addresses itself to the mind, not to the eyes.
-Jean Dubuffet, 1951