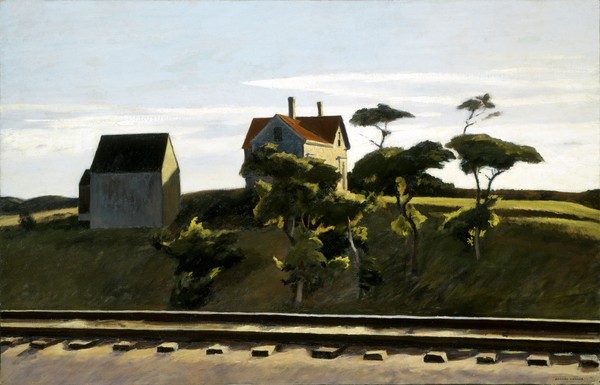 This painting, named after an East Coast railroad line, was created during the Depression and depicts a landscape and desolate house. The prominent track evokes Hopper’s recurring themes of transience and the loneliness of the traveler.

The frontal view and the broad horizontal line of the railroad suggest a stage, underlining the separation between the viewer and the scene.

The crisp lines and sharp angles of the house are softened by the rounded, natural shapes of the trees, and the dark green balances the bright sky. Hopper’s compositions are often based on oppositions like this that unite to form a harmonic whole.

“[The] painting depicts the railroad tracks that then ran across Cape Cod, not very far from the Hopper property.”

“The tracks he once painted in a canvas called New York, New Haven, and Hartford have been removed. The embankment and track beds linger on, serving no purpose, however, but merely marking the landscape.”

The Rootlessness of Modern Life

“The notion of the railroad as the middle ground between industrialism and pastoralism had been explored earlier in the paintings and prints of Edward Hopper. In American Landscape of 1920 Hopper used the railroad tracks to divide the rural foreground with its field of cows from the suburban background suggested by a lone house. The same motif was later explored in paintings such as House by the Railroad, 1925; Hills, South Truro, 1930; and New York, New Haven, and Hartford, 1931. Gail Levin observed, ‘Railroad tracks seem to suggest for Hopper the continuity, mobility, and rootlessness of modern life as they merely pass by small towns and rural areas all but forgotten by the forces of progress.'”

“Hopper's scenes initially seem unchanging because of their arrested quality and generally smooth geometric surfaces: he does not depict weathered facades as do Charles Burchfield and Andrew Wyeth. Still, Hopper's architectural interest illustrates that the buildings of the past, if not the values and way of life, remain for some time. The structures in rural, small-town, and city scenes frequently date from the nineteenth century. In depicting what Lewis Mumford called 'the worst emblems of the period,' Hopper includes a past of dubious achievement, pretension, and bad taste in its imitations of European grandeur. These structures, which intentionally or not reflect America's cultural confusion, are sometimes made stunning by light and sometimes made touching by their awkwardness: this is the American scene ‘with its hideous beauty.' The rural scenes do not feature the details of a particular decade's architectural mistake; nonetheless, paintings like Hills, South Truro (1930) and New York, New Haven, and Hartford (1931) are markers of change. The perspective of both and the title of the latter convey the dominance of car and train. The artist does not ascend a summit as a godlike conqueror or visionary poet who would possess material and spiritual values of the prospect. Rather, he is a transient who may not know the people of the place or return again.

In these two paintings, the sides and backs of the houses are presented. This may reflect ‘facts' of the railroad's placement, the attempt to cut up the landscape unobtrusively and avoid going through the front yard (as was the case with House by the Railroad). The railroad does not obtrude, though. The tracks become prominent and the houses superfluous and displaced. Like Hopper's human figures, his houses often face away from the viewer and toward the sun—as if involved in a private existence, even transcendence, that can only be witnessed askance. Considered against past American landscapes, this side-view implies a way of life that no longer faces the viewer, who can be engaged in the past and present of the scene only tangentially, almost by accident. Perhaps the triangles and rectangles of buildings set against the irregularity of hillsides attract the eye. There is no representation of practical or overtly moralistic engagement in the scene. Hopper's farms never seem farmed. Form triumphs, although in such Hopper paintings the form is not exclusively dependent on conceptual reconstruction, as in a cubist exercise. The perspective remains influenced by the position of artist as passenger in a car or train: it is not that of the fl'ur lost in the crowd, a romantic seeing his own idealism returned, or the poetic farmer attuned to every nuance. It is the view of the traveler who seeks momentary relief from boredom and who finds the landscape familiar, rather like others seen, and impenetrable. Form may triumph in emptying the scene of sentiment and didacticism, but it also empties it of use-value and approachable humanity.”

“The landscapes still inspired Edward; working outdoors, he painted The Camel's Hump and New York, New Haven, and Hartford, depicting the tracks of the railroad line that then ran out along the length of Cape Cod. (Some months later, when the latter painting was acquired by the Herron Art Institute in Indianapolis, he allowed: ‘If any serious objection arises regarding the title it can easily be changed. In that case let me know and I will send you another,' revealing how often he considered a variety of titles before settling on one to use.)

Although Edward Hopper is best known for his views of New York interiors and buildings, he also painted landscapes, particularly in and around his summer home in South Truro, Cape Cod, Massachusetts. These scenes capture the starkness of the rural landscape with its rustic barns and houses. Most of his Cape Cod views are devoid of people, giving them an abandoned look that echoes the loneliness and alienation in his New York scenes.

New York, New Haven and Hartford is named after the railroad line that operated in southern New England and New York. The painting was created during the Depression and depicts a landscape and desolate house in South Truro, Massachusetts. The prominence of the tracks evokes Hopper’s recurring theme of the loneliness of the traveler as well as an intimate but transient awareness. The long horizontals of the railroad are like a stage that separates the audience from the performance. The swaying trees suggest that the breeze from a recently passing train has caught its branches. The railroad is an unwelcome encroachment that Hopper indicates by using the strong horizontal that seems to intrude upon the quiet rural landscape. Beginning with the 19th-century Hudson River School painters, American artists have depicted cultivation and technology as encroachments on the wilderness that would eventually destroy it. 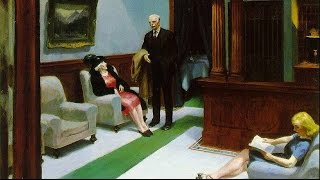 A conversation between curator Marty Krause and former curator Harriet Warkel regarding Hotel Lobby as well as New York, New Haven, and Hartford and the 2008 exhibition "Edward Hopper: Paper to Paint."