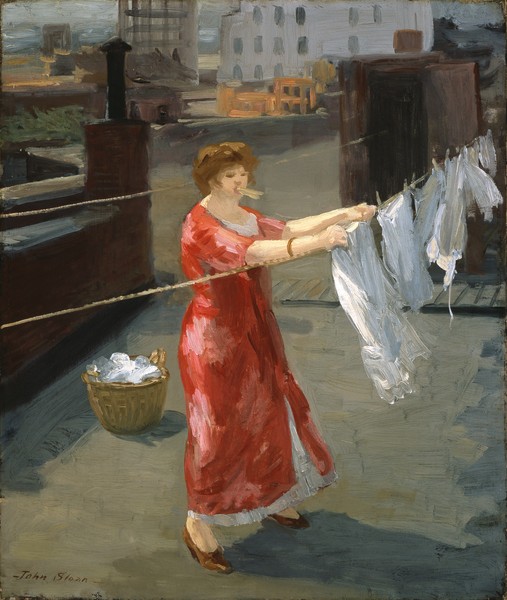 Red Kimono on the Roof

This unglorified glimpse of a woman hanging laundry was probably painted from Sloan's studio window.

Sloan was part of a group of artists who became known as the Ashcan School.

This unglorified image of a New York City woman attending to her laundry with a clothespin in her mouth is one of John Sloan's classic paintings. Sloan, who worked as a newspaper illustrator, joined with several of his journalist-painter colleagues to form The Eight, a group of realist artists who opposed the conservative American art establishment of the early 1900s. They exhibited together only once, in 1908, but their controversial show was considered a landmark expression of artistic freedom. Several of the members, including Sloan and the group's founder, Robert Henri, produced images of ordinary Americans. The revolutionary choice of down-to-earth subject matter inspired the epithet that became their name: the Ashcan School.

Sloan believed that the best way to understand life was through direct observation and by associating with working-class people. His slice-of-life paintings recorded the bustling activity of New York City's Lower East Side with broad, vigorous strokes and a deliberate avoidance of sentimentality. Red Kimono on the Roof may be a scene that Sloan saw from the window of his studio, which would explain its elevated vantage point. The picture's sense of immediacy is enhanced by freely applied brushstrokes with few hard edges. In addition, the strong contrasts between the light and the dark shadows suggest the passage of time. John Sloan taught at the Art Students League in New York City and counted among his students such important future artists as Alexander Calder, David Smith, and Barnett Newman.

John Sloan was born in Lock Haven, Pennsylvania, and moved with his family to Philadelphia where he attended Central High School. He worked for a print dealer and as a newspaper illustrator. Sloan studied at the Pennsylvania Academy of the Fine Arts, where he met Robert Henri, and moved to New York to become a part of Henri’s urban realist circle. Under Henri’s leadership Sloan and seven other artists opposed the traditional hold that that the National Academy of Design had exerted over art in America. In 1908 the group, which became known as The Eight, held an exhibition at Macbeth Gallery in New York. Sloan and four other members of the group painted down-to-earth subject matter which earned them the epithet of Ashcan School, because critics felt their art was offensive. The Ashcan School artists recorded the bustling activity of New York’s lower East Side with broad, vigorous strokes and a conscious avoidance of sentimentality. Sloan taught at the Art Students League and passed on his interest in urban subject matter to students like Reginald Marsh and Raphael Soyer, who followed in their teacher’s footsteps.

Red Kimono on the Roof, an unglorified glimpse of a woman, clothespin in mouth, attending to her laundry, may have been painted from Sloan’s studio window, which would explain the elevated vantage point. The picture’s sense of immediacy and direct observation is enhanced by the spontaneous brushwork and Sloan’s attention to light and shadow.