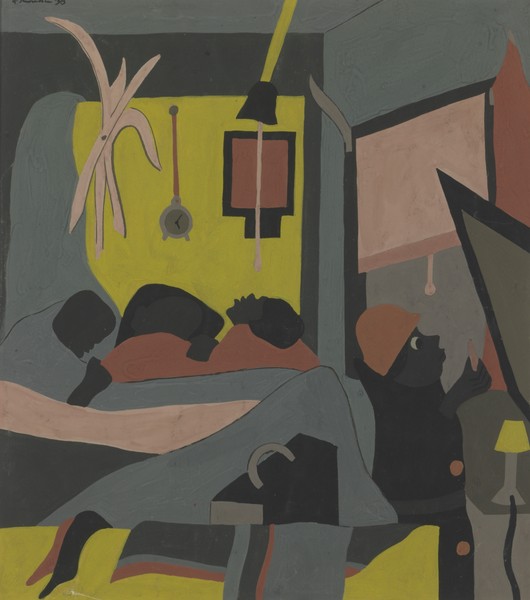 This scene is composed of flat, simplified forms, vibrant colors and geometric patterns.

Lawrence, one of the nation's most important African American artists, excelled in making paintings and prints of contemporary life.

During the Depression Lawrence focused on the tenement house in New York's Harlem.

Jacob Lawrence, an African American artist trained in New York City at the height of the Harlem Renaissance, was one of the few painters of his generation who grew up in the black community and was taught primarily by black artists; his primary teacher was Charles Alston at the Harlem Art Workshop. A Social Realist painter early in his career, Lawrence found the subjects for much of his work in black history and in observations of daily life.

The Birth is a Depression-era image set in a Harlem tenement. A man rests his head on a pregnant woman's protruding stomach, while another male figure appears to be assisting in the birth of her baby. Unconcerned with the impending event, the figure on the right prepares to leave the apartment. Lawrence presents an intimate but unsentimental picture of poverty and overcrowded conditions in the slums. Painted in 1938 when he was just twenty-one years old, The Birth was created in the same year in which Lawrence completed the forty-one paintings of the Toussaint L'Ouverture series, his famous pictorial history of the Haitian revolution, which in 1804 established the first black republic in the western hemisphere.

If at times my productions do not express the conventionally beautiful, there is always an effort to express the universal beauty of man's continuous struggle to lift his social position and to add dimension to his spiritual being.
-Jacob Lawrence, 1984

Born in Atlantic City, New Jersey, Jacob Lawrence grew up in Harlem, in New York City, which provided material for many of his paintings. Lawrence often painted in series, such as his famous The Migration of the Negro, comprising 60 paintings. This series made the 24-year old Lawrence an immediate success, and he became one of America’s most honored painters. He exhibited his work in major museums, received honorary doctorates, won prizes and foundation grants, and was a member of the American Academy of Arts and Letters, the National Council of the Arts, and the National Academy of Design. In 1990 Lawrence was awarded the National Medal of Arts.

Lawrence attributes his success to his heritage, stating: “It is more important that an artist study life than study the technique of painting exclusively.” From his early years he chronicled his personal experience as a black man and the African-American struggle for freedom and justice in his paintings of slave revolts, ghetto life, discrimination, and the devastation of war. Lawrence’s paintings mix humor with adversity and offer hope for the future of African Americans.

The Birth, a Depression-era scene in a tenement house in New York’s Harlem, exemplifies Lawrence’s primary interest in depicting African-American history and contemporary life. Here, the artist used flat, simplified forms and geometric patterns derived from Cubism. Lawrence’s small format presents the viewer with an intimate picture of the overcrowded conditions in the tenement houses and the poverty of its inhabitants.

Nesbett, Peter T., and Michelle DuBois, eds. Over the Line: The Art and Life of Jacob Lawrence. Seattle: University of Washington Press in association with the Jacob Lawrence Catalogue Raisonné Project, 2000. The artist’s quote is on page 192.