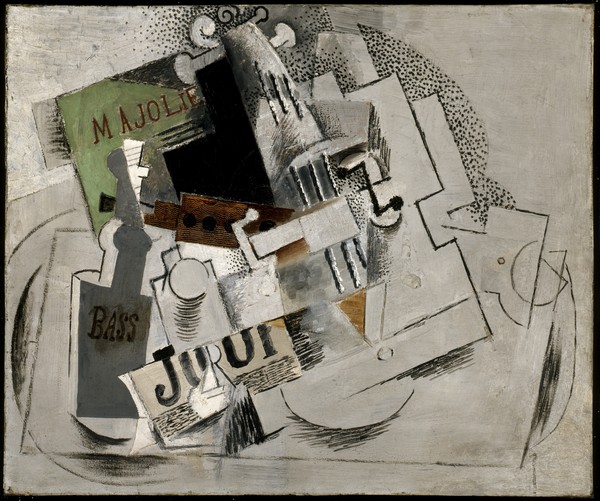 Pablo Picasso's Ma Jolie-""my pretty one""-takes its title from the refrain of a popular song and celebrates Picasso's lover, Eva Gouel. The artist used color sparingly in order to focus attention on the fractured, overlapping shapes. Indeed, upon closer examination, images of musical instruments, cups and glasses, sheet music, a bottle, a cigarette, and a newspaper emerge from the layered forms.

By reducing everyday objects to simple geometric forms and by showing them from a variety of vantage points at once, Picasso moved beyond the notion that a painting should merely create an illusion of the world. A canvas became a surface on which to experiment with shapes, lines, and textures. Picasso was equally inventive in the way he applied paint to the canvas: a comb pulled through wet pigment creates staves on sheet music and the wood grain of a recorder; a clump of white paint evokes smoke from the long cylinder of a cigarette.

This style, which art critics soon called ""Cubism,"" emerged in the years before World War I, when Picasso was working with the painter Georges Braque. Although neither artist ever completely abandoned representational painting, Cubism helped pave the way toward pure abstraction, a radical development of 20th-century art.

No theoretician, no writer on art, however interesting, . . . could be as interesting as Picasso. A good writer on art may give you an insight to Picasso, but, after all, Picasso was there first.
-Artist David Hockney, 1988

{1} Picasso signed an exclusive three-year contract with Kahnweiler on 18 December 1912, which is reproduced in Malcolm Gee, Dealers, Critics and Collectors of Modern Painting: Aspects of the Parisian Art Market between 1910 and 1930, Garland Publishing, New York and London 1981, Appendix A-18. Kahnweiler photographed every object in his possession, and this painting is given as Archives Photo 317 by Pierre Daix and Joan Rosselet, Picasso, the Cubist years, 1907-1916: a catalogue raisonné of the paintings and related works, Boston, 1979, catalogue no. 622 (illustration) Also in Christian Zervos, Pablo Picasso, Oeuvres de 1912 à 1917, volume 2, Paris, 1932-1978, catalogue no. 505 (illustration)
{2} This painting does not appear to have been included in the four sales in which Kahnweiler's stock was dispersed by the French government between 1921 and 1923. The expert responsible for the catalogue and sales estimates was Léonce Rosenberg, who was enthusiastic about the cubist works of Picasso, among others. A 'Léonce Rosenberg, Galerie de l'Effort Moderne' label bearing the stock number '5296,' once located on the verso of the painting, is preserved in IMA Historical File (61.36).
{3} See Robert L. Herbert et al., The Société Anonymne and the Dreier Bequest at Yale University: A Catalogue Raisonné, New Haven, Connecticut, and London, England, 1984, p. 530.
{4} Nierendorf's name appears in a hand-written record (probably in Wilbur Peat's handwriting; Peat was Director of the John Herron Art Museum from 1929 to 1965) of the provenance of this painting. In 1942 in order to 'raise funds for Yale to use in maintaining the Société Anonymne,' Dreier sold a handful of items, including this painting. See Herbert, ibid., pp. 530, 765, 772.
{5} Invoice and receipt from Schempp to Fesler, both January 1944, in IMA Historical File (61.36).