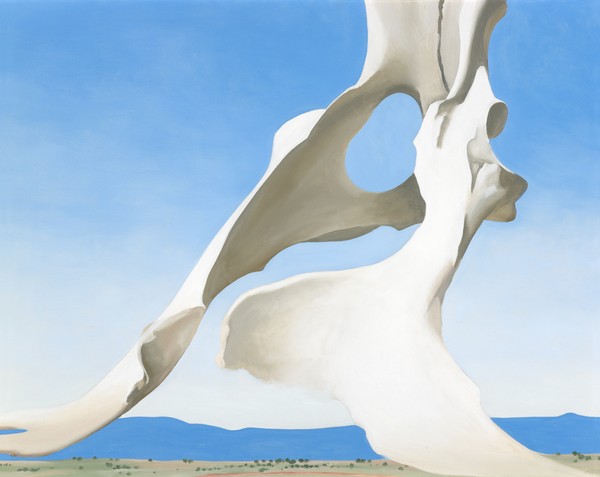 Pelvis with the Distance

Georgia O’Keeffe was born on a farm in Wisconsin, the second of seven children. Her mother sent the girls to art classes and encouraged O’Keeffe to continue her training. She attended Town Hall School in Wisconsin and studied with a watercolorist. O’Keeffe then enrolled at the School of the Art Institute of Chicago and attended the Art Students League in New York, where she studied under William Merritt Chase. Her first art job was as a commercial artist, and she also taught art in an elementary school in Texas. O’Keeffe attended a class at the University of Virginia Summer School where she was introduced to the work of Arthur Wesley Dow. His free-thinking opinions on creating art were a major influence on her. Without O’Keeffe’s permission, a friend took her drawings to the New York art dealer, Alfred Stieglitz, whose 291 gallery showed the work of the most advanced abstract artists. Stieglitz exhibited her drawings. When O’Keeffe learned of this display, she confronted Stieglitz but let the drawings hang. Although Stieglitz was much older than O’Keeffe, he divorced his wife and the two were married.

O’Keeffe began making large-scale compositions containing highly magnified natural forms, which became her signature style. Between 1929 and 1949, she regularly worked in New Mexico, and the area became a major theme in her art. After Stieglitz died, O’Keeffe moved to a home she had purchased in Abiquiu, New Mexico, and made the area around it a theme for many of her paintings. The Georgia O’Keeffe Museum was established in Santa Fe, New Mexico, in 1997, and her home and studio in Abiquiu became a National Historic landmark in 1998.

In Pelvis with Distance O’Keeffe juxtaposed an enormous skeletal form rising majestically from the flat foreground with a mountain range lying low on the horizon. The radical manipulation of scale and perspective, and the strong but elegant contours of the bone, exemplify O’Keeffe’s genius for capturing the essential forms of nature. O’Keeffe wrote to collector Caroline Marmon Fesler about her bone series, “It is a kind of thing that I do that makes me feel I am going off into space – in a way that I like – and that frightens me a little because it is so unlike what anyone else is doing – I always feel that sometime I may fall off the edge – It is something I like so much to do that I don’t care if I do fall off the edge –”